PATTERNS OF HISTORY TO FORESEE THE FUTURE

Strategists use History as a tool for making judgements about the future. Hopefully the origins of the First World War is still taught in schools in these times when Russia and Ukraine are at war.

History as a discipline (Historiography) was established some 2500 years ago in the 5th century BC in Ancient Greece. But even relatively young cultures refer to learning from the past. For example, Maori have a proverb: Ka mura, Ka muri which refers to walking backwards into the future.

If you are to plan your business for longer than a decade you need to think about how the demographics of your market might change. This month I want to look at a theory about patterns of behaviour in different generations.

For example, any child born in the last five years has spent at least half their life under a Covid influence: avoiding playing with those outside the bubble, not seeing the lower half of adults faces, having parents at home 24 hours a day, etc. This will be as great an influence on them as the wars were on the Great Generation, population explosion was on the Boomers, and technology was on Millennials.

One theory of change is a four-stage cycle of four “turnings” where history repeats in roughly 20 year themes. After a crisis such as a war (GFC or covid?) society has a common cause and individualism is frowned upon (think post war era). This is followed by a generation who wants to search for their meaning as individuals to “find myself” (the “sixties” onwards). This morphs into an era where individuals are free to achieve unconstrained by societal restraints e.g. the 1980s through to the mid 2000s. Another crisis follows and forces people back to thinking as a collective again. This is our current era -from 2008 through to 2028 if the model holds true. (EEK- Covid is not the end?)

Because these historical events shape generations in childhood and young adulthood; then, as parents and leaders in midlife and old age, generations, in turn, shape history.

“It’s not about the health pandemic; it is about the massive economic disruptions that are shifting like tectonic plates below the earth’s surface. The crisis climax is not just an event itself but also our ill-prepared reaction to it”.

Crises incentivise people to come together. They form tribes. Descriptions of “Them” and “Us” provide a security blanket. It’s obvious in Russia. In the UK, Britons elected to be separate from Europe. Globalism is evil today in the same way it was embraced twenty years ago by a different generation. It’s even clear in New Zealand when looking at who is seen as one of the team and who is accused of not playing their part in the “tribe’s” safety and protection. If the model holds true, then our society is ready for the big “reset” . Are you ready?

Does this “Fourth Turning” model hold true? Your feedback is welcome. 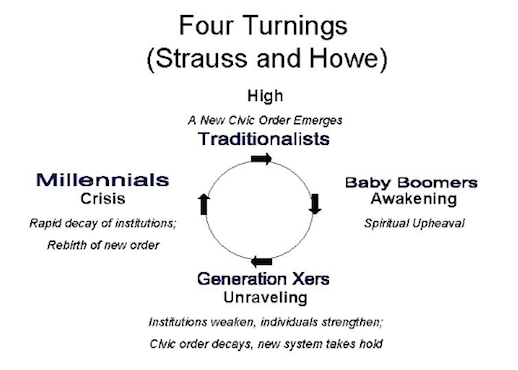 Read more about Generations in History

Think about the patterns you see in your market. How will your market change over the next decade or two as the next generation takes charge? What crises are good for your business (New Zealand traditionally does well in a war by selling wool and meat) and which are bad (where is our country going in relation to China)? 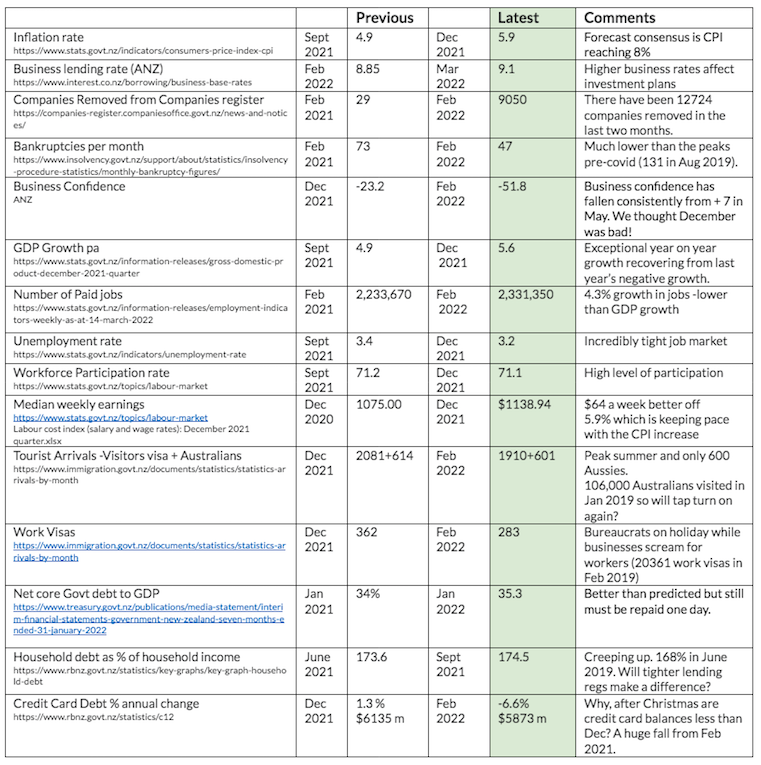 This is a strategic newsletter. What do the numbers say that could influence your business?

Is the survey reflecting the real world? Well look at credit card debt. Usually this explodes over Christmas. Not this year. Consumers are hunkering down and repaying debt fast. Gone are the days of splurging on renovations and new furniture.

Businesses can’t get workers. There is a tight employment market (see below) and the government can’t seem to organise the bureaucrats to work at the same level as two years ago. In 2019 there were 20,361 work visas approved in February. This year they could barely manage 1% of that number: just 283. Forget about fruit pickers and cheap labour. I know from my role on the DHB that the reason you can’t get an overnight operation in hospital and children can’t get middle ear procedures done is not because of Covid taking up beds. It’s because we have no staff to backfill the ones sacked because they were not vaccinated (despite the government approving Covid positive staff working on the wards!) and because we can’t replace the staff we lose even in a normal year who go off to study, work overseas or retire. Many businesses are in that boat.

Question: Does this level of business and consumer confidence resonate with your sector? 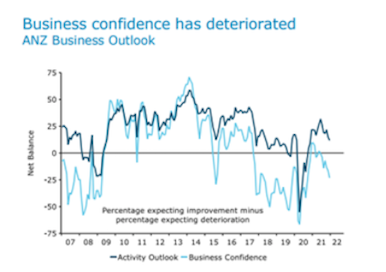 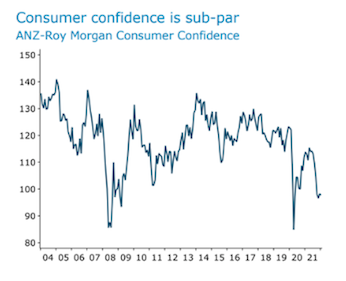 Last month I asked readers to explain the unemployment figures:

Statistics NZ says there are 4,224,900 New Zealanders of working age in the country. When I calculate 3.2% of that number I get 131,676 which should be the number of unemployed people.

So why are there 56,312 more people than that on the jobseeker benefit?

READERS’ RESPONSES
“The number of people being sanctioned for not taking a job has dropped.  You can be on jobseeker when you claim to be too unwell to get a job – e.g. high on drugs.”

“The only conclusion that can be drawn is thousands of jobseeker beneficiaries are not unemployed. Technically speaking they do not fit the Stats NZ definition of unemployed which is:

“The number of people being sanctioned for not taking a job has dropped.  You can be on jobseeker when you claim to be too unwell to get a job – e.g. high on drugs.”